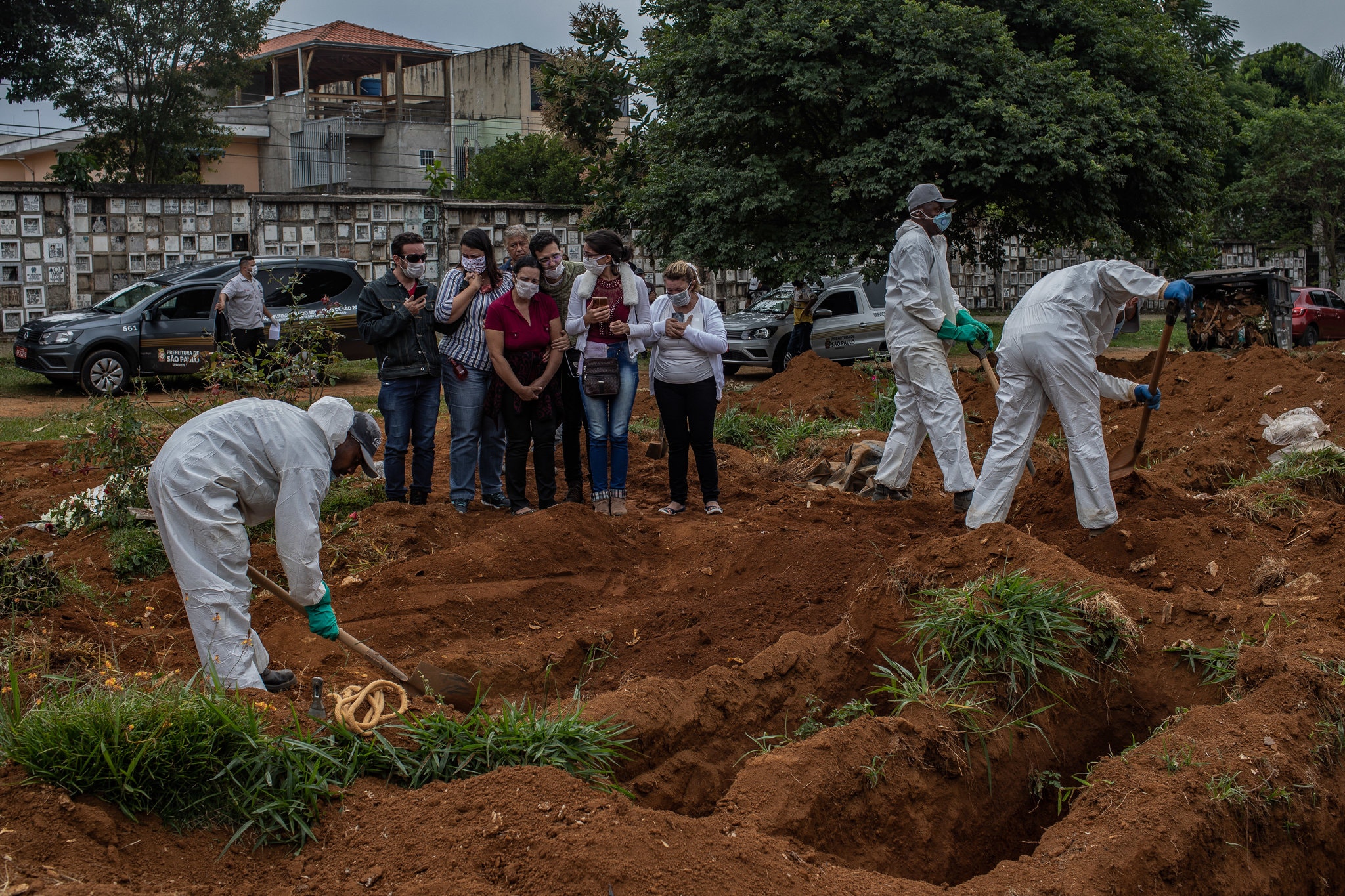 Crates of masks snatched from cargo planes on airport tarmacs. Countries paying triple the market price to outbid others. Accusations of “modern piracy” against governments trying to secure medical supplies for their own people.

As the United States and European Union countries compete to acquire scarce medical equipment to combat the coronavirus, another troubling divide is also emerging, with poorer countries losing out to wealthier ones in the global scrum for masks and testing materials.

Scientists in Africa and Latin America have been told by manufacturers that orders for vital testing kits cannot be filled for months, because the supply chain is in upheaval and almost everything they produce is going to America or Europe. All countries report steep price increases, from testing kits to masks.

The huge global demand for masks, alongside new distortions in the private market, has forced some developing countries to turn to UNICEF for help. Etleva Kadilli, who oversees supplies at the agency, said it was trying to buy 240 million masks to help 100 countries but so far had managed to source only around 28 million.

“There is a war going on behind the scenes, and we’re most worried about poorer countries losing out,” said Dr. Catharina Boehme, the chief executive of Foundation for Innovative New Diagnostics, which collaborates with the World Health Organization in helping poorer countries gain access to medical tests.

In Africa, Latin America and parts of Asia, many countries are already at a disadvantage, with health systems that are underfunded, fragile and often lacking in necessary equipment. A recent study found that some poor countries have only one equipped intensive care bed per million residents.

So far, the developing world has reported far fewer cases and deaths from the coronavirus, but many experts fear that the pandemic could be especially devastating for the poorest countries.

Testing is the first defense against the virus and an important tool to stop so many patients from ending up hospitalized. Most manufacturers want to help, but the niche industry that produces the testing equipment and chemical reagents necessary to process lab tests is dealing with huge global demand.

“There’s never really been a shortage of chemical reagents before now,” said Doris-Ann Williams, chief executive of the British In Vitro Diagnostics Association, which represents producers and distributors of the lab tests used to detect coronavirus. “If it was just one country with an epidemic it would be fine, but all the major countries in the world are wanting the same thing at the same time.”

For poorer countries, Dr. Boehme said the competition for resources is potentially a “global catastrophe,” as a once-coherent supply chain has rapidly devolved into an arm-twisting exercise. Leaders of “every country” are personally calling manufacturing chief executives to demand first-in-line access to vital supplies. Some governments have even offered to send private jets.

In Brazil, Amilcar Tanuri cannot offer private jets. Dr. Tanuri runs public laboratories at the Federal University of Rio de Janeiro, half of which are “stuck doing nothing,” instead of testing health workers, because he said the chemical reagents he needs are being routed to wealthier countries.

“If you don’t have reliable tests, you are blind,” he said. “This is the beginning of the epidemic curve so I’m very concerned about the public health system here being overwhelmed very fast.”

Brazil is Latin America’s hardest hit country so far, with more than 10,000 confirmed cases and a testing backlog of at least 23,000. It is also the region’s most controversial player in the pandemic, with a president, Jair Bolsonaro, who has been an outspoken skeptic of the risks posed by the coronavirus.

But below the political noise, the country’s scientists began trying to ramp up testing hours after the country’s first case was announced.

Yet within weeks, Dr. Tanuri was left to frantically call private firms on three continents, trying to source the chemical reagents needed for the 200 testing samples his labs receive every day — only to be told that the United States and Europe had already bought up months of production.

“If we purchase something to arrive in 60 days, it’s too late,” he said. “The virus goes faster than we can go.”

The situation is similar for some African countries.

After reporting its first death on March 27, South Africa moved swiftly, introducing a strict lockdown and announcing ambitious house-to-house canvassing that has already seen 47,000 people tested. South Africa has more than 200 public labs, an impressive network that surpasses wealthier countries like Britain and was developed in response to past outbreaks of H.I.V. and tuberculosis.

But, like Brazil, it is reliant on international manufacturers for the chemical reagents, and other equipment, needed to process the tests. Dr. Francois Venter, an infectious diseases expert who is advising the South African government, said the struggle to acquire the reagents was endangering the country’s overall response.

“We have the capacity to do large testing, but we’ve been bedeviled by the fact the actual testing materials, reagents, haven’t been coming,” he said. “We’re not as wealthy. We don’t have as many ventilators, we don’t have as many doctors, our health system was in a precarious position before coronavirus.”

“The country is terrified,” he added.

To address the problem, South Africa’s National Health Laboratory Services has set up a “war room” of around 20 people who are continuously calling different suppliers — yet running into problems sourcing the test kits and protective equipment they need.

“The suppliers are basically saying their production output does not meet the needs,” said Dr. Kamy Chetty, the director of the agency. “They are working flat out.”

Experts say that the industry that produces test kits is quite small. Ms. Williams, the industry representative in Britain, said there was no shortage of chemical reagents but that delays were arising in the production process, including the necessary checks and approvals, because the huge demand was overwhelming the system.

“Manufacturers don’t just want to sell to rich countries,” said Paul Molinaro, head of supply and logistics for the World Health Organization. “They want to diversify, but they’ve got all this competing demand from different governments.”

He added: “When it comes to the sharp end of a hypercompetitive environment with price rises, these low- and middle-income countries are going to end up at the back of the queue.”

Last week, President Trump invoked the Defense Production Act to prohibit the export of face masks to other countries and demand that American firms increase production of medical supplies.

One American company that makes masks, 3M, responded by warning of “significant humanitarian implications” if it stopped supplying masks to Latin America and Canada. This week, the company and the Trump administration reached a deal that allows 3M to continue exporting to developing countries, while also providing the United States with 166 million masks over the next few months.

Last month, Europe and China introduced their own export restrictions on tests and protective equipment.

Some private firms, however, are putting profit aside to help developing countries with more fragile health systems.

A British testing manufacturer, Mologic, has received government funding to develop a 10-minute home coronavirus test in partnership with Senegal that, if approved, would cost less than $1 to produce. It would not be reliant on labs, electricity or sourcing expensive supplies from global manufacturers.

Mologic agreed to share its technology with Institut Pasteur de Dakar, a flagship lab in Dakar, to help produce the kit “at cost.” While the goal is to make it widely available, it is predominantly aimed at slowing the spread of the virus in Africa.

For poorer countries, the supply problem is bigger than just testing.

Zambia is at the very beginning of its epidemic curve with only one death so far, but it is already struggling to source masks, as well as testing materials like swabs and reagents, says Charles Holmes, a board member of the Centre for Infectious Disease Research in Zambia and the former chief medical officer for the Obama administration’s President’s Emergency Plan for AIDS Relief, known as PEPFAR.

When Zambia tried to place an order for N95 masks, Dr. Holmes said, the broker tried to sell them for “five to 10 times” more than the usual cost, despite checks revealing the masks expired in 2016.

He said manufacturers have told Zambian officials that they cannot guarantee a delivery date for supplies because “most of them are being snapped up by the U.S. and Europe.”

While few would criticize governments for looking out for their own people, health experts believe that it is in everyone’s interest to help poorer countries get the supplies they need.

“An infection with a highly transportable respiratory virus anywhere in the world puts all countries at risk,” Dr. Holmes said. “Wealthy nations not only have an obligation to look out for countries that are going to struggle, but they should also have some self interest in ensuring that the pandemic is contained in developing countries.”